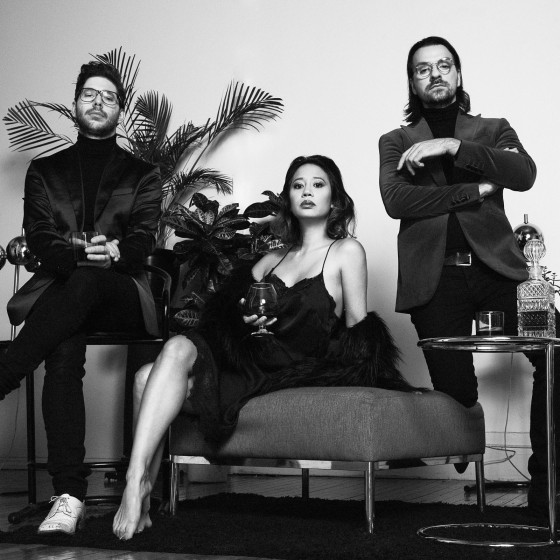 ‘Starlite’ is the first single to be lifted from Montreal-based disco synth pop band LE COULEUR’s upcoming album ‘P.o.p’. , scheduled to be released on October 28th, produced by the band’s very own Steeven Chouinard and mixed by Eric Broucek (DFA record, The Drums, Neon Indian).
Led by Vietnamese-Canadian singer Laurence Giroux-Do, the band is comprised of Laurence, Patrick Gosselin (Bass / keyboard / guitar), Steeven Chouinard (Drums / sequence programming) and joined on tour by percussionist Philippe Beaudin. After releasing their critically acclaimed debut album Origami in 2010, LE COULEUR befriended French Fox, a like-minded electronic music producer who would soon become a close collaborator. Released in 2013, their next EP Voyage Love featured LE COULEUR’s distinctive disco-pop sound. The EP was warmly received online coverage from over 15 countries, bringing them to the stage of a number of renowned festivals across the globe. Voyage Love also received a GAMIQ nomination for ‘EP of the Year’, as well as mentions on many year-end lists.
In 2014, after a European tour, LE COULEUR released Dolce Désir, a second EP praised by the critic and the public alike. To this day, the album continues to amass hundreds of thousands of plays on digital platforms such as Spotify and YouTube.
The band that killfully blends French lyrics and groovy sounds to create love-themed songs, describes ‘Starlite’, “Kind of 90’s house dance music with the rhythm section of a Sade’s song (we’re fans). That’s what we had in mind when this piano riff came out.  A sexy, minimalist mood. Starlite is the name of the city where the story of the album is taking place.”.